According to Pitchbook’s latest VC Update, venture capital activity in the artificial intelligence (AI) and machine learning (ML) markets continued at historically high levels through 3Q21 with $25.9B invested globally across a record 1,395 deals. Horizontal platforms including Databricks and Dataminr continued to lead deal value, but investments were widely dispersed with categories including robotics, autonomous vehicles, clinical decision support, natural language technology, and information security automation, each raising more than $1B.

VC activity in AI / ML has risen steadily and dramatically over the last ten years, as the chart below shows. Quite remarkable that the $2B in deal value in 2011 is tracking to advance 50-fold by the end of 2021. 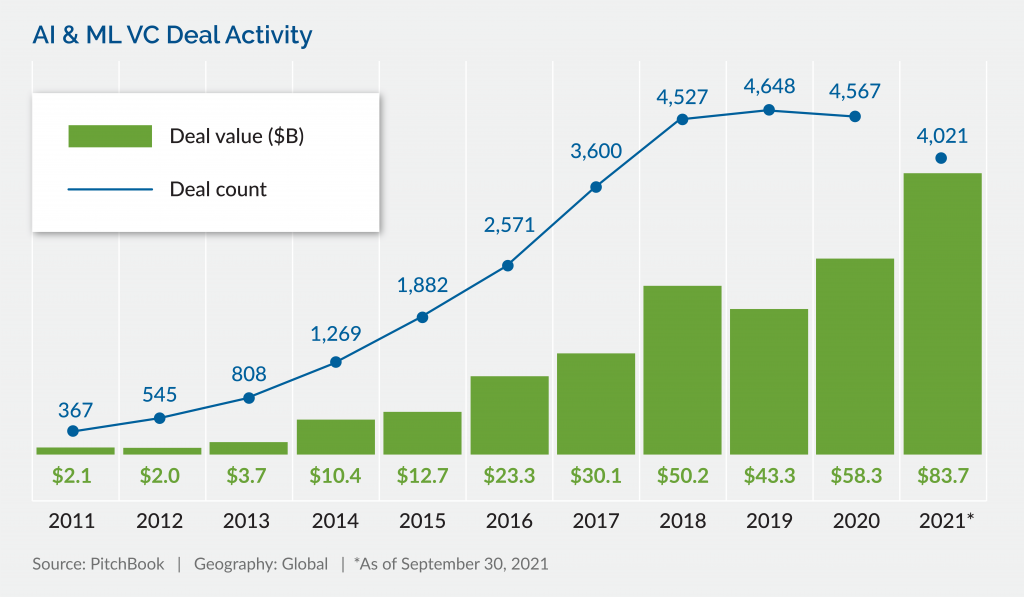 After a brief slowdown in deal activity in 2019, it appears the pandemic may have accelerated the longer-term upward trend in deal interest in AI / ML companies. Also buoying deal growth has been the rise in valuation step-ups in recent years. The median step-up in deals this year reached 2.2x after ranging between 1.6x to 1.8x over the previous four years.

We expect deal activity to continue to rise based on a virtuous circle of increased applications of AI / ML, an accelerated pace of advances in research and development, and continuing attractive valuations.  Emerging trends, including the evolution in AI / ML to accommodate smaller data sets requiring limited processing, should exponentially expand the accessibility and value of AI applications for smaller companies.

The ongoing refinements in deep learning and neural networks should also enable AI to play an increasingly valuable role in data creation, management, and analysis in edge environments and the internet of things (IoT). All these developments should lead, in turn, to greater opportunities for innovative startups in the AI / ML space and for loosening the grip that a few tech giants have had on this space to date.